News And EventsNewsTrial Begins Of New...

Invasive alien species present a major threat to biodiversity loss.  An important part of BIM’s role in developing the Irish aquaculture sector is to work with operators to minimise the environmental impact and improve overall environmental performance of their operations. This app will help the aquaculture sector exchange information on any potential invasive alien species they encounter to help with their management.

The app works by the user taking a photo of a suspected invasive alien species they discover. The location and other coordinates are captured by the app and the information is then sent to BIM to investigate further and if confirmed, catalogue.

Grainne Devine, BIM and Arjan Gittenberger, GiMaRIS, a specialist in ecological risk assessments, demonstrated the new app to father and son, Hugh and Johnny Wilhare, Mulroy Bay mussels, Cranford, Co Donegal. The Wilhare family are among the first members of the Irish aquaculture sector to test out the new app during its initial pilot phase. The mussel producers have been growing rope-grown mussels in Mulroy Bay for more than 30 years.

Grainne Devine spoke of how the species information contained in the app will help farmers learn more about risks to and from their operations and said:

The aim of the new app is to help the aquaculture sector in Ireland undertake more comprehensive risk assessments and to help strengthen their biosecurity plans.

The new app will be launched and available for download in September 2019. 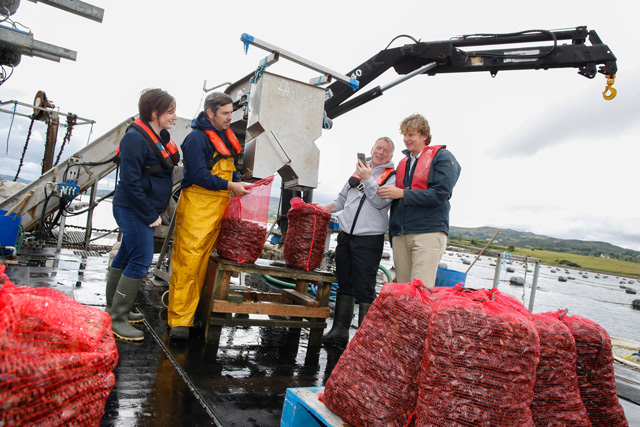