News And EventsNewsSustainable Practices Of The...

Bord Iascaigh Mhara (BIM), Ireland’s Seafood Development Agency, has a big presence at this year’s SeaFest including a rare opportunity to board a 45 metre pelagic fishing trawler to learn about the sustainable fishing practices of the Irish fishing fleet.

Speaking ahead of the festival, Bord Iascaigh Mhara CEO Jim O’Toole said: “Ireland is an island nation and we would like more people to be aware of what happens in our waters and of how Irish seafood is sustainably produced. SeaFest is an important platform for us to showcase the great efforts the men and women in the industry are taking to protect Ireland’s marine environment and develop the industry as a global leader in sustainably sourced seafood.”

MFV ‘Girl Stephanie’ is the 45 metre pelagic trawler that will be moored at Galway docks throughout the three-day National Maritime Festival.  Young skipper Tomás Conneely and his crew of six will be on hand to welcome visitors on board his family owned fishing vessel. This marks Tomás’ first season as skipper of this large fishing vessel that is used to catch fish including herring, mackerel and blue whiting. The pelagic fishing season typically runs from October until April each year and ‘Girl Stephanie’ is just one of 23 such vessels in Ireland.

Tomás Conneely said: “I’m delighted to be at SeaFest with ‘Girl Stephanie’ this year to give people the chance to tour a working fishing trawler and to learn about the Irish fishing sector. There’s very little information available about fishing as a possible career choice for young people. I hope that visitors to SeaFest will learn more about the industry and see that fishing is not a ‘stone-age’ career choice. I come from a fishing background, as both my parents hail from the Aran Islands and worked in the fishing sector. When my father began his career, he was pulling nets in with his hands – he wasn’t even wearing gloves and there was much less emphasis on safety.  Now there’s much more emphasis on safety and so much is automated. Take ‘Girl Stephanie’ for example, it’s almost entirely run using hydraulics. A lot has changed in the fishing sector..”

Bord Iascaigh Mhara’s Taste the Atlantic ambassador, Joan Mulloy will be sailing to SeaFest in her Figaro yacht which will be lifted out of the water and also open to visitors to tour. 31-year-old Joan Mulloy is the daughter of Galway mussel farmer, Michael Mulloy and the first Irish female to compete in the famous Solitaire du Figaro yacht race in France.

Other highlights at Seafest include an immersive virtual reality experience where visitors can plunge to the oceans’ depth and learn about fish that are caught and farmed around the coast in Ireland.

BIM will also have exhibits concerning the growing global issue of marine litter, and some of the initiatives, including Fishing for Litter, that the fishing sector and local community groups in Ireland are participating in.

The weekend’s entertainment will also include a series of demonstrations from Bord Bia and Bord Iascaigh Mhara on how best to shop for Irish seafood and ways to prepare it.

MFV ‘Girl Stephanie’ will be open each day from 12pm – 6pm on Friday, 9am – 6pm on Saturday and 9am-6pm Sunday. SeaFfest is free of charge. Details on the event can be found at www.seafest.ie 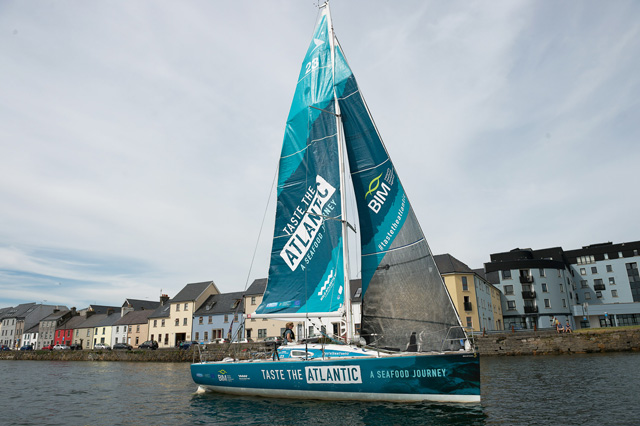 Joan Mulloy, BIM Taste the Atlantic ambassador arrives to Galway ahead of SeaFest in her Figaro yacht.