Members of Ireland’s 1300 strong oyster sector met in Galway on the eve of the 64th  Galway Oyster festival to demonstrate to a packed audience of chefs and world champion oyster shuckers, how distinctive Irish oysters are, depending on where along the Irish coastline they are being raised.

The cold, nutrient-rich waters that surround Ireland help to produce oysters that are increasingly being sought after domestically and overseas. Almost 10,000 tonnes of Irish oysters were produced in 2017, the equivalent of some 13 million servings of a dozen oysters, and at a value of more than €43million according to the Bord Iascaigh Mhara (BIM) 2017 Business of Seafood Report.

JP McMahon, was among the guests who spoke at the Taste the Atlantic Oyster Experience evening on Nimmo’s pier. The Galway based chef and restauranteur praised the BIM and Fáilte Ireland Irish seafood trail, and said:

“Taste the Atlantic respresents for me a coming home of the oyster. It shows people, both home and abroad that the oyster plays a central part in our food and culinary culture. We have some of the best oysters in the world. I know this because I have travelled and tasted the menu. We need to shout loud about the sumptuous quality of our oysters.”

Hannah and Thomas Galvin of Moyasta Oysters in West Clare were among the producers at the event.  The Galvin family, a second generation family of oyster farmers, sell directly to restaurants in Ireland and to retailers in the UK market. They are the first in Ireland to use the trestle and basket method of oyster production, a method that requires zero handling and that relies on the waves and tides of the Atlantic waters to tumble, shake and buff their oysters as they mature.

Thomas Galvin explained, “It was entirely by accident that my family began oyster farming 35 years ago. My father, a long-standing dairy farmer, happened to stop a man who was crossing one of his fields one day. The man was carrying a steel trestle on his back, and said that he was heading out to Poulasherry Bay to grow oysters. This was the first time my father had heard of oyster farming, and it’s the day he decided to start farming oysters.”

Oyster tastings and tours of oyster farms form part of the trail that stretches along Ireland’s Atlantic coastline. The trail was established in 2015, and allows visitors to experience first-hand how Irish oysters are produced with the Atlantic tides and to meet with producers.

Richard Donnelly,  Business and Innovation Manager, BIM said, “Ireland has the ideal conditions for growing oysters.  It’s important to celebrate the industry and the diversity of Irish oysters and to realise that no two producers’ oysters are the same.”

France remains Ireland’s largest export market for oysters. However, demand has increased significantly in Ireland and overseas, and exports of Irish oysters to Asian markets have trebled in the last decade.

Sinead Hennessy, Fáilte Ireland, spoke of the unique experience of Ireland’s wild Atlantic way and its seafood trail and said:

“Taste the Atlantic encourages visitors to engage with the true essence and food story of the Wild Atlantic Way. This year was all about advancing the producer element of the trail by developing and advancing experiences that are completely shaped by the sea. These new offerings will encourage visitors to slow down, and to spend more time to fully appreciate the uniqueness of the Wild Atlantic Way”

Details on Taste the Atlantic can be found at www.wildatlanticway.com/highlights/taste-the-wild-atlantic-way 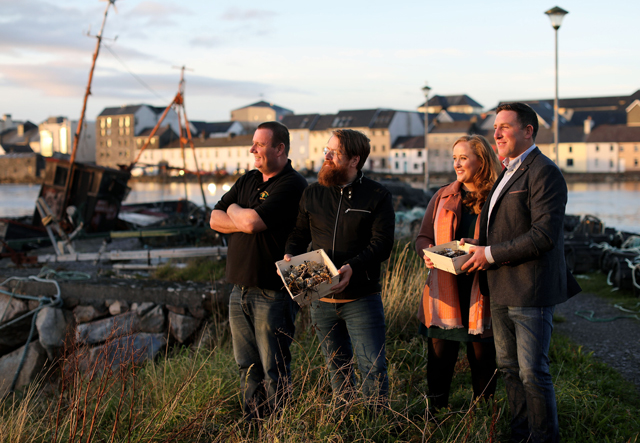