A marine garden containing almost 30,000 cubic litres of Atlantic sea water and brimming with sea life from different types of seaweeds to fish species native to Irish waters has been named overall winner in the concept garden category at Bloom 2019 today ( May 30th). The Bord Iascaigh Mhara sponsored garden,  Aquamarine, supported by the European Maritime and Fisheries Fund, was designed by wife and husband team Liat and Oliver Shurmann and highlights the need to protect Ireland’s marine environment against plastic waste.

“Marine, human and all other life is contingent upon a marine environment that’s clean and free from pollution and plastics. Every item of plastic that surrounds the garden at Bloom is a real example of marine litter that has been collected by fishermen and members of the wider fishing and seafood industry in Ireland. Sustainability is central to BIM’s strategy and it’s the driving force for men and women working in the seafood industry in Ireland.”

The fish species and water will be returned to the sea when Bloom ends on Monday and all of the materials used in the garden have been either salvaged or recycled and will be reused.

Oliver Shurmann spoke about the design of the marine garden and said:

“It’s designed to look like a scientific cross-section of a landscape with layers of plastics visible underneath it. That’s what we [Liat and I] wanted to achieve. We wanted to create an atmosphere and to combine something beautiful with something that was repulsive. This will shock people. Children will see this and wonder, ‘what are we doing?’” 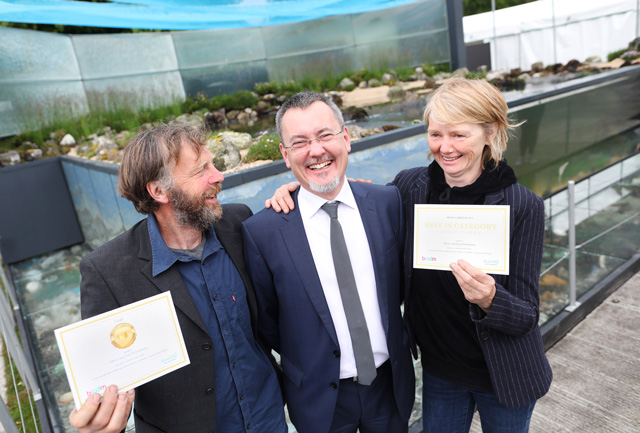 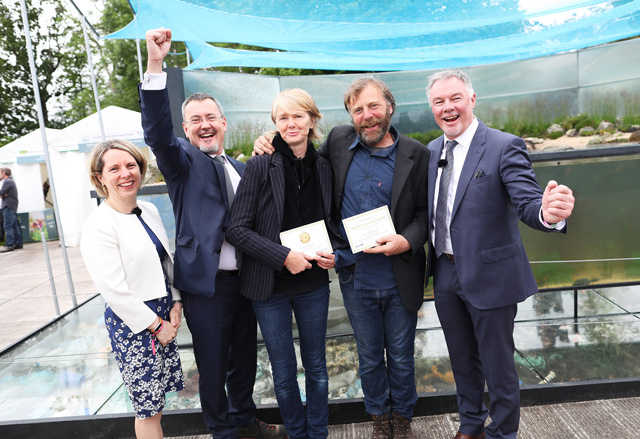 The garden has been designed to highlight the problem of plastics in our oceans as part of the Clean Oceans Initiative that was launched by the Minister for Agriculture, Food the Marine, Michael Creed earlier this year.

Catherine Morrison, Sustainability and Certification Manager at BIM, spoke of how the marine garden aims to raise awareness of the impact plastic is having on the marine environment and how fishermen and fish farmers in Ireland are working together to address the problem.  She said:

“It’s hard to quantify how much plastic is in our oceans but the average adult in Ireland uses roughly 60kg of plastic every year, one of the  highest rates of any country in the European Union. Not all of the plastic ends up in the oceans, but the plastic that does causes a problem.”

Aquamarine is open to visitors each day of Bloom from Thursday 30th May until Monday 3rd June. A video that tells the story of the inspiration behind the marine garden can be watched here.