Five up and coming young chefs, aged between 21 and 24, have been successfully awarded places on BIM’s Taste the Atlantic Ambassador Programme, an exciting initiative created by Bord Iascaigh Mhara in partnership with Chef Network to drive awareness of the provenance of Irish seafood among young and aspiring chefs. Working with Chef Network, nominations were sought from around the country and five candidates have been selected following a written submission and interview process. 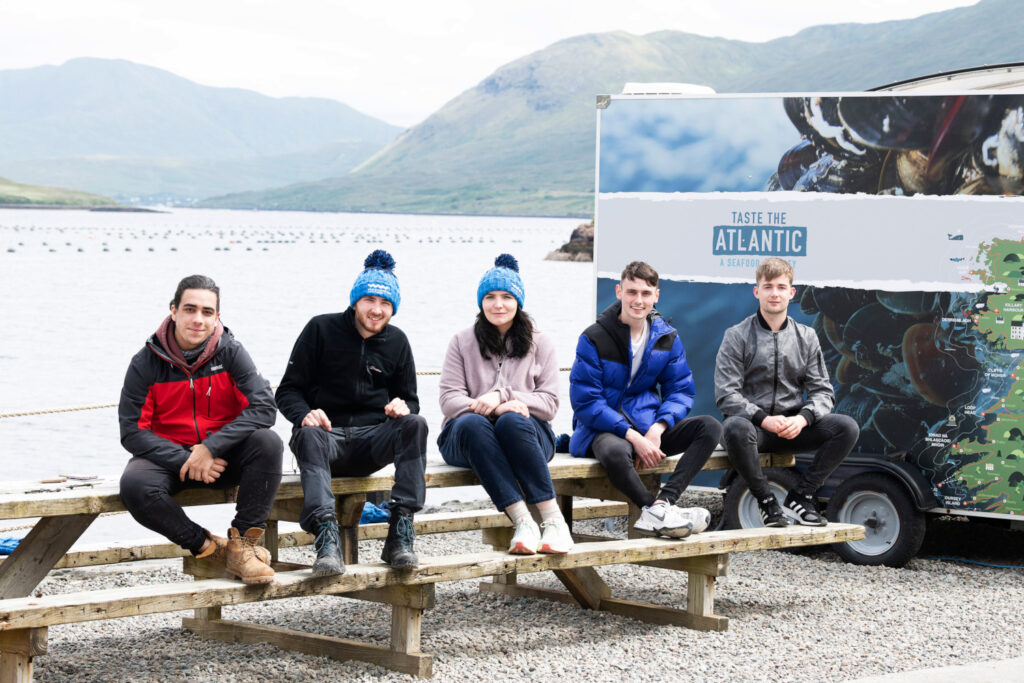 The five Ambassadors will now take part in a three-month programme including mentoring from some of our premium seafood producers along the Taste the Atlantic, A Seafood Journey! trail and workshops with Master fishmonger, Hal Dawson and Michelin-starred chef, JP McMahon.

Taste the Atlantic, A Seafood Journey! was developed by BIM in partnership with Fáilte Ireland and the trail, sweeping from Malin Head, Co. Donegal to Kinsale, Co. Cork, showcases the incredible range of seafood producers and visitor attractions along the Wild Atlantic Way to visitors.

Kicking off the Ambassadors programme is a producer visit to Kelly Oysters in South Galway, who will introduce them to a third-generation shellfish business that exports around the Globe. That afternoon they will participate in a culinary masterclass on Irish seafood with Chef JP McMahon. The group will then visit Killary Harbour in Co. Galway and will learn about mussel farming and Seafood Tourism directly from Killary Fjord Shellfish, this will be followed by a trip to DK Connemara Oysters where the Ambassadors will learn about oyster farming and the storied history of oyster production in Ballinakill bay.

Speaking after the young chefs were announced, Mairtín Walsh, BIM said, “As a member of the interview panel I was struck by the energy and knowledge all of the nominees.  We genuinely had a tough job selecting only five chefs, but we can say with confidence they will be vibrant and vociferous ambassadors for premium Irish seafood into the future. We wish them the very best of luck on their seafood journey!”

Executive Chef at Harvey’s Point, Donegal and Chef Network Advisory Council member Chris McMenamin, who also took part in the selection interviews, commented: “This programme is a fantastic chance to show young chefs the wealth of seafood out there on the Wild Atlantic Way; to get to know the producers, understand how it is produced, and get excited about working with it. We would like to see more local seafood featured on menus and these chefs can help champion that and inspire others. At the same time, the programme will greatly expand their knowledge and skills and contribute to their professional development.  It’s been really refreshing to meet the candidates and we are genuinely excited to work with the five selected ambassadors over the coming months”.

Sarah is originally from Kerry but is now Chef/Manager at Time & Tide Café in Annagry, Co. Donegal. Sarah has studied and honed her culinary skills in CIT and LYIT and has extensive experience working in tourism including at the world-famous Molls Gap in Kerry. Sarah is from a dairy farming background is a passionate believer that sustainability in food production is critical and that chefs and producers are key stakeholders in the future of sustainable food production.  Sarah wants to learn more about sustainable seafood production and bring learnings back to her work in Co. Donegal.

Jake is from Wicklow and is very keen on all things fish and marine related. Jake has been developing his fish skills in Glovers Alley. Jake is also a keen sport fisherman, taking every opportunity to get involved in fishing whether in Ireland or the Canaries or Singapore. Jake is a graduate of DIT and cites Nathan Outlaw and Josh Niland as his inspirations.  Jake will be very much at home on the shore and on boats with Taste the Atlantic producers.

Kevin is from Clifden, Co. Galway and grew up around fishing where he has fished for lobster and crab for years. He is extremely passionate about sustainability and wild food, where he forages daily to further champion local, organic produce within the Connemara Sands menu. Kevin has worked and completed stagiaires in high end restaurants and hotels in Connemara, Galway and the UK including The Black Swan at Oldstead and The Oakroom at Adare Manor. Kevin is ambitious and is starting on an MSc in Food Business and Innovation in UCC. Kevin is already familiar with some Taste the Atlantic producers but wants to learn much more.

Lucas is from Salvador de Bahia in Brazil a city with great seafood cuisine. Lucas developed his interest in food in childhood, sharing meals with his family. ”In my family sharing a meal was the way that we choose to celebrate, so, my relationship with the kitchen has this powerful feeling attached. ”     Lucas came to Ireland to challenge himself and to broaden his range of culinary skills and techniques. Lucas wants to bring the diverse flavours and techniques of historic Salvador de Bahia to the Taste the Atlantic producers to create a new and exciting fusion.

Andrew is from Dublin and has been working at the Yacht Pub and Upper Deck Restaurant in Clontarf for several years. A high-quality seafood offering at the Upper Deck Restaurant has helped Andrew develop a strong interest in seafood and the culinary skills required to bring out the best in the product. Andrew wants to get out and about on the water with Taste the Atlantic producers and bring a bit of the west coast back to Clontarf, Andrew is keen to draw on his Italian heritage to create interesting new dishes.