News And EventsMedia ReleasesMinister Of State At...

Minister of State at the Department of Agriculture, Food and the Marine Andrew Doyle T.D. announces 29 Local Community Projects to Deliver Investment of over €645,000 under EMFF South East Fisheries Local Action Group Programme

Minister of State at the Department of Agriculture, Food and the Marine, Andrew Doyle T.D. announced the latest tranche of funding under the Southeast FLAG, Fisheries Local Action Group programme at a reception in the Arklow Bay Hotel in the coastal fishing town of Arklow in Co Wicklow this morning Monday 10th July.

The Southeast FLAG Fund which covers the counties of Wicklow, Waterford and Wexford has approved 29 projects with grant aid of €423,000 delivering a total investment of over €645,000 across many sectors of the seafood and wider marine industry. The South East FLAG is one of 7 FLAG regions from Ireland’s coastline that will benefit from the FLAG scheme, administered by BIM, Ireland’s Seafood Development Agency, which is co-funded by the Exchequer and the EU under Ireland’s European Maritime and Fisheries Fund (EMFF) Operational Programme 2014-2020. Over the duration of the EMFF programme, the national FLAG scheme will deliver €12 million in funding to Ireland’s coastal communities.

Speaking at the South East FLAG funding launch at the Arklow Bay Hotel, Minister of State, Andrew Doyle T.D. said; ‘I am delighted to be here today in Arklow to announce details of the Southeast FLAG first funding allocation for the South East FLAG. Some 29 diverse and innovative projects are being supported with grant aid of €423,000 across Wicklow, Waterford and Wexford that will deliver a total investment of over €645,000. The focus on the diversity and innovation is hugely evident and the projects coming forward are responding to a wide range of needs, services and skills in the seafood and wider marine sector. At the heart of these communities are the fishermen but so too is the marine heritage and ancillary facilities and of course fish and seafood all of which are being promoted through many inspiring projects in the Southeast FLAG. It’s fitting that our coastal location this morning represents the core ethos of FLAG in terms of coastal community rejuvenation and will see increased supports in place for the seafood and wider marine industry The 29 projects announced today follow the national announcement by my colleague and Minister for Agriculture, Food and the Marine Michael Creed T.D. of 153 projects that will deliver €3.6 million in investment to all 7 FLAG regions around the coast’

The South East FLAG is proactive in bringing together many organisations across the seafood and wider Marine sector in Wicklow, Waterford and Wexford with the overall FLAG ethos of fostering rejuvenation in the South East’s coastal communities, creating greater supports for the seafood sector, protecting the rich marine heritage while also generating increased enterprise, innovation, creativity, social inclusion and environmental awareness in the continued development of the Fisheries, Seafood and Marine sectors. Increased job creation, positive social impact and wellbeing throughout the South East’s coastal communities are at the heart of the FLAG strategy for the three counties involved.

BIM’s CEO Jim O’Toole added;‘BIM has worked closely with the Southeast FLAG to enable the members to develop and implement a strategy that is tailored to the specific needs of the Southeast region for all three counties involved, Wicklow, Wexford and Waterford. The region is a well-established and resourceful fishing and aquaculture community where marine tourism is also important and the announcement of such a diverse range of projects today by Minister Doyle highlights the value of seafood and the wider marine sector to the county. I would like to thank and recognise the Board of the South East FLAG led by their Chair Noel McDonagh for their dedication and commitment to deliver this important programme for the South East’

The South East FLAG Strategy highlights the central themes of economic development while unlocking co-operation amongst three counties and associated marine organisation which is harnessing and developing the skills, supports and knowledge of coastal communities in the Southeast, a region long established as a fishing, aquaculture and marine industry area In addition,¿ promoting social wellbeing, and inclusion amongst diverse communities along with coastal cultural heritage, the South East FLAG has a proactive and inclusive strategy. It also looks at protecting and promoting the environment of the South East coastal communities, and ultimately protecting the needs of the fishing and marine communities. The South East’s rich marine heritage in terms of fishing, seafood, marine tourism boast many unique features and characteristics across the three counties represented in the South East FLAG.

In light of the location of the South East FLAG’s launch in Arklow three distinctive projects have been approved by the FLAG for support and highlight the core ethos of the scheme are as follows:

Focusing on improved facilities at Arklow Bay Harbour for fishermen, this project in association with Wicklow County Council showcases the development of fishing hut facilities and storage for fishermen. Such facilities will enhance working conditions in this busy fishing harbour while also unlocking positive co-operation amongst a number of organisations, all of which highlights the FLAG ethos of enterprise and rejuvenation of services in a coastal communities where a rich fishing history has been strong.

The second project showcases social inclusion, traditional skills in the marine sector and also the links with tourism in terms of the Coastal Rowing and the opportunities this product creates in communities and as a health and wellbeing service. Two projects in the Southeast are excellent examples of this, Vartry Rowing Club in Wicklow and St Kearns Rowing Club in Wexford.

The South East has a hugely rich Marine Heritage and preservation of such marine artefacts for future generations is a key focus of the Creaden Beach project whereby archaeology and marine history come together as a research project with the ultimate aim of preserving the hugely rich natural artefacts from the coast with the aim of showcasing in an exhibition in the future. The South East FLAG is setting the foundation for research and protecting the knowledge for future generations.

The Chairman of the South East FLAG, Noel Mc Donagh says, “The South East FLAG is a hugely influential strategy which has brought together 3 counties of Wicklow, Waterford and Wexford under an umbrella. Three very distinctive counties but all three have the common bond of a very rich coastline with deep rooted marine and fishing history. Employment from the sector has been important to our coastal communities but so too has the heritage that the marine sector¿ has brought in so many different guises and the FLAG strategy allows us to maintain this while also protecting it for future generations. In addition it has unlocked the passion for the sector and opened communications amongst many organisations to set the foundation for a series of excellent projects all of which look at the industry differently yet with the ultimate aim of making our coastal communities better places to live and work for all generations.” 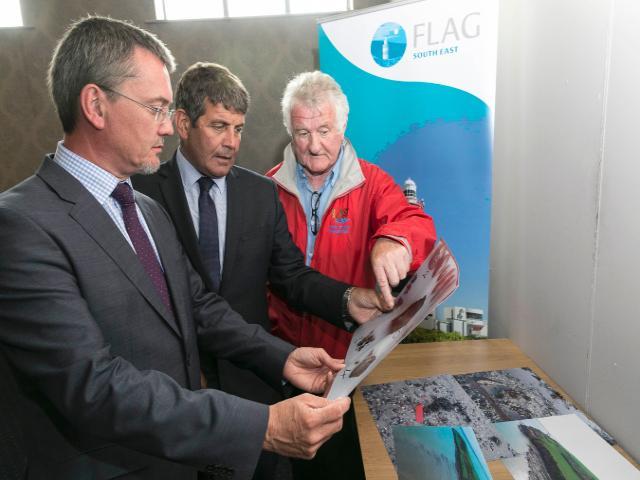