A new visitor centre developed to tell the story of Irish salmon is opening in the Burren, Co. Clare later this month (25th October). The Taste the Atlantic Irish Salmon Experience, financed under the European Maritime and Fisheries Fund, forms part of the wider Bord Iascaigh Mhara (BIM) seafood trail comprising salmon, mussel and oyster producers along the Atlantic seaboard from Donegal to Cork. This month’s launch is one of hundreds of Fáilte Ireland Taste the Island events taking place in celebration of the rich food and drink heritage on the island of Ireland.

Salmon has featured significantly in Irish history. For the first time in Ireland we have a dedicated visitor experience that uses some of the latest technologies for people to learn about this sustainably produced food in a way that is interesting and fun.

The Taste the Atlantic Irish Salmon Visitor Experience is located in Lisdoonvarna, Co Clare in the Burren Smokehouse. Visitors can travel from ancient Ireland to present time using touch screens, light walls and sound to discover how salmon has featured in Irish mythology to its role in sustaining communities living in some of Ireland’s most remote coastal locations today.

Taste the Island is an all-island initiative designed to significantly enhance Ireland’s global reputation for its food and drink experiences. This three-year programme was developed by Fáilte Ireland in partnership with Tourism Northern Ireland and Tourism Ireland. The enthusiasm, passion, creativity and energy that this initiative has been met with by the food, drink and wider hospitality industry is very encouraging. Fáilte Ireland are actively working with BIM on Taste the Atlantic, a key pillar in the Taste the Island initiative, and we are delighted to support the launch of the new Taste the Atlantic Salmon Experience, a fantastic example of the quality food and drink experiences Ireland has to offer. Taste the Island highlights more than 700 food and drink-related experiences are taking place across Ireland this Autumn, reaching into every corner of the country. We look forward to building on this year’s event, and creating an even bigger and better Taste the Island for 2020 and beyond.

Sales of Irish organic salmon remain strong and were valued at €119m in 2018 making it Ireland’s leading seafood export according to the BIM Business of Seafood report as consumers increasingly look for high quality and more natural products.

Richard Donnelly referred to the increase in domestic sales of Irish seafood since the seafood trail was launched some four years ago.

Twenty-four seafood producers are now included in the Taste the Atlantic seafood journey. When we first created the seafood trail,the majority of their sales were to overseas markets. Today many of these producers are selling 100% of their seafood to the growing domestic market. Restaurants and seafood retailers are increasingly sourcing seafood directly from these producers; knowing the producer, knowing the origins of the seafood means they know the provenance. They can share their story with their customers and reassure them it has been sustainably produced and it is helping the local economy. This transparency is key to building trust and, in turn, sales.

Birgitta Hedin-Curtin, owner and manager of the Burren Smokehouse and of the new visitor experience spoke of the growing interest locals and visitors have in food provenance. Birgitta said:

This self guided interactive experience is a fantastic world class educational facility for the whole family. International and Irish Visitors to the Burren can get in-depth knowledge about the Irish Wild and Organic Salmon as well as experience the ancient Legend of the Salmon of Knowledge. 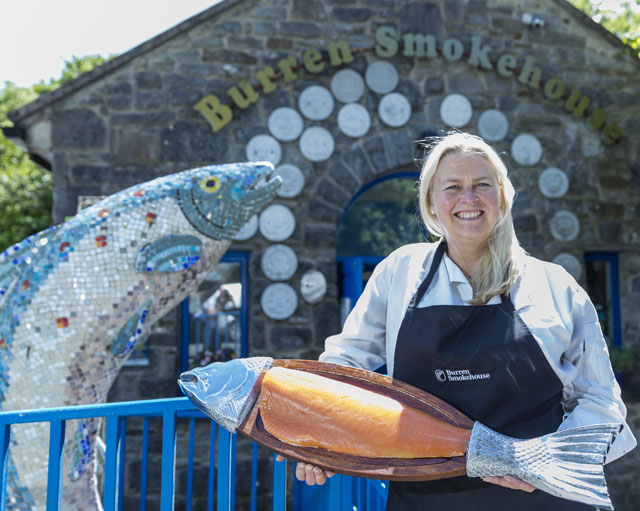