News And EventsMedia ReleasesFurther Commitment Made By...

The Erris Inshore Fishermen’s Association has announced its commitment to tackling the issue of marine litter through its participation in Bord Iascaigh Mhara’s (BIM) voluntary national programme, Fishing For Litter. The programme was established to investigate better means through which onshore waste management could be improved in an effort to reduce windblown debris and stream key recyclables generated by the industry itself.

Fishing For Litter is a recognised EU scheme that asks fishermen to voluntarily remove and retain marine litter on board if it interacts with their gear as they go about their fishing. Filled bags are deposited in participating harbours on the quayside where they are moved by harbour staff to a dedicated skip or bin for disposal.

Speaking of Erris Inshore Fishermen’s Association’s addition to the programme, Jim O’Toole, CEO of BIM said; “We are delighted to see the Erris Inshore Fishermen’s Association sign up to the Fishing For Litter programme. A healthy ocean is important for a healthy sustainable fishery especially with regard to traditional fishing and fishery-dependent communities. It is fantastic to see local groups leading the charge within their own communities in tackling such an important issue”.

Marine debris ingestion and entanglement poses serious ramifications for marine life.  While marine debris poses a physical threat to marine life, it also causes physical harm to commercial and recreational boats from fouling of propellers, to jet intakes as well as damage to hulls.

Speaking about the programme, Melvin Tighe, chair of Erris Inshore Fishermen’s Association said; “Tackling marine litter and becoming active stewards of the north Mayo coast is of huge value both to the community we live in and the environment in which we work. We are delighted to take the opportunity, here on the Atlantic Seaboard, to give our commitment to work hard alongside other fisherman right across Europe in a bid to keep the waters in which we fish free from litter”. 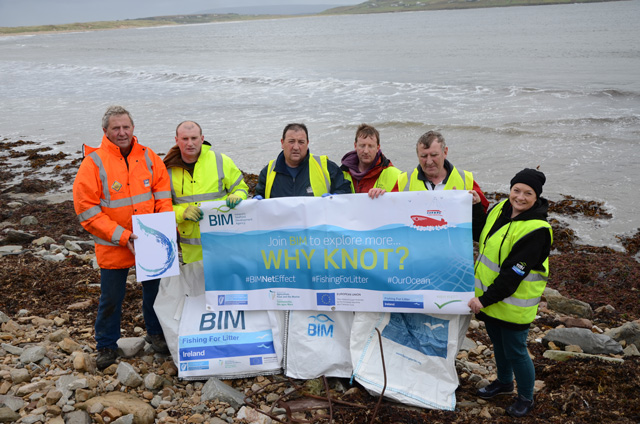