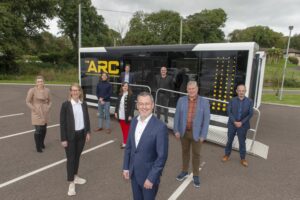 At the BIM and Hatch Irish Aquatech Community Day at the RDI Hub in Killorglin:

A total of 9 start-ups with backgrounds in areas including engineering, IT and farming took part in BIM’s Innovation Studio at the RDI Hub in Killorglin this month.

The programme, formerly known as BIM’s Aquaculture Accelerator, is run by BIM in partnership with global accelerator Hatch and took part as an in-person event over two weeks.

To date, 38 such start-ups have taken part in BIM’s Innovation Studios, raising more than €9million and generating more than 40 jobs in aquatech in Ireland.

An Aquatech Community Day was held during this year’s Innovation Studio at which Minister for Agriculture, Food and the Marine, Charlie McConalogue T.D. gave the opening address.

Speaking to the audience via a live-streamed video, Minister McConalogue referred to how major technological advances have been recurring features in our history and how this emerging innovation and new technology focus for the aquaculture industry is already transforming the industry, on this island and around the world.

The Minister also spoke of the role the Innovation Studios are playing to help achieve the ambitious goals set out in his Department’s Food Vision 2030 Strategy, namely ‘ Attract global investment in aquaculture technology’ and to ‘Promote Ireland as a knowledge base for aquaculture technology and research and attract investment on our knowledge base’.

Jim O’Toole, CEO BIM, presented on the future of aquaculture in Ireland, highlighting Ireland’s unique and fortunate position to have a young, skilled and dynamic population, where the average age is 38 and where almost 6 in every ten adults has a third level education.

The continued purpose of BIM’s Innovation Studios is to create a dynamic environment for start-ups with new ideas for aquatech where they can innovate, experiment and test their ideas with leading experts from backgrounds in aquaculture, finance and marketing. The Studios are also giving these start-ups access to funding from venture capital – where they can secure early-stage funding quickly – and where they can quickly and with agility fill gaps in the global aquaculture market. The fastest growing protein sector in the world.

BIM is currently working to create a dedicated Irish Aquaculture Fund to further support the growing aquatech businesses that have already taken part in their Innovation Studios. Hatch are also in the process of raising a €75million fund for global aquaculture innovation.

The Innovation Studio is supported by the European Maritime and Fisheries Fund and is helping to nurture early-stage ideas in aquatech.

You can find out more about which cookies we are using or switch them off in settings.