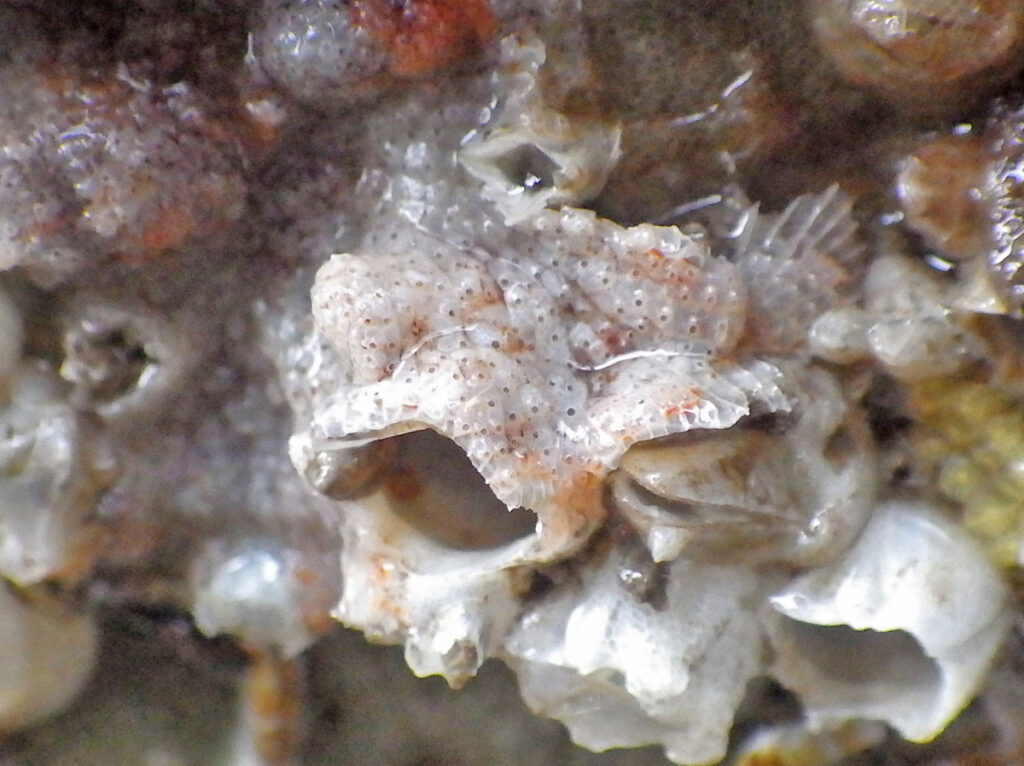 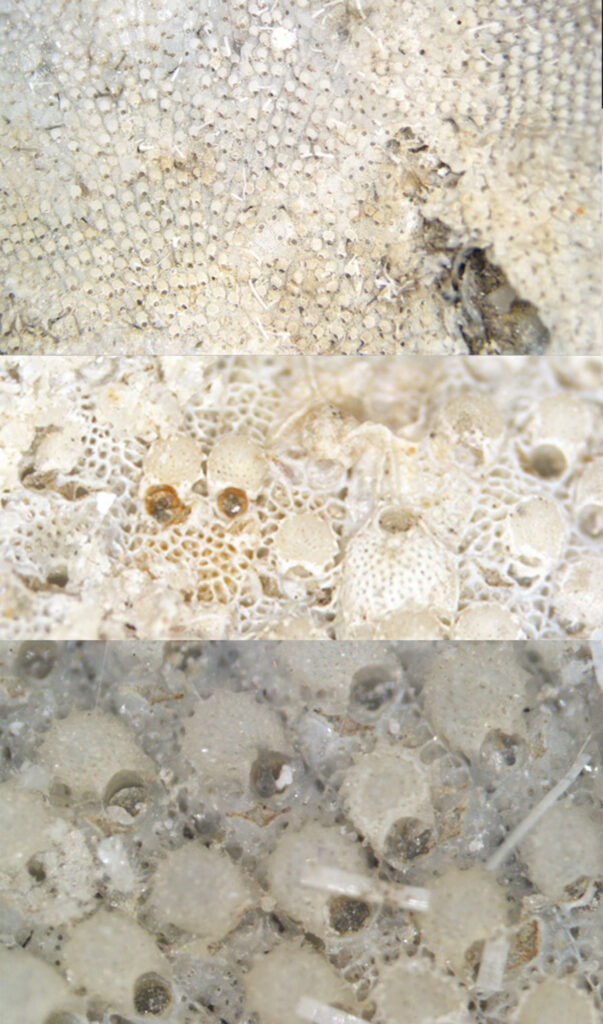 Red calcareous bryozoan species, which forms irregular crusts, potentially covering large surfaces of hard substrata. The colonies are bright to dark red forming crusts with irregular outlines and distinctive foliose lobes.  Various parts of the larger colonies tend to be dead. This is clearly visible as the colony turns white at those places.

When this Schizoporella japonica is found it is usually abundant and forming large red colonies over hard substrata at places where previously such red bryozoan colonies were absent or rare. Distinguishing features concern the form of the zooids and number of ovicells. However, an experienced taxonomist will be required to reliably check these microscopic characters.

Many very similar looking red encrusting bryozoans can be found in Irish waters on shells. Several species have colonies that very closely resemble those of Schizoporella japonica. This includes the native Schizoporella unicornis and the alien Schizoporella errata. An experienced taxonomist will be necessary to distinguish between these species.

Schizoporella japonica can be found in the subtidal on hard substrata and is known to be tolerant of salinities from 15 to 36 psu and water temperatures from 4 to 40 °Celsius.

After being first sighted in Europe in 2009, Schizoporella japonica is known to be locally abundant, especially in marinas and harbours on the Island of Ireland, Great Britain and Norway. As the pelagic larvae tend to settle within a few hours after being released, it is likely that this species is mainly spreading throughout Europe with shellfish transports and within hull fouling communities.  Actively reproducing colonies have been reported in the British midwinter.

Red encrusting bryozoan colonies on oysters and mussels are clearly visible and may therefore reduce the commercial value of these shellfish. Encrusting bryozoans in general can make smooth surfaces rough, increasing the settlement of other fouling species like ascidians and calcareous tube worms.  As Schizoporella japonica colonies are locally abundant and have been be found to overgrow shells, the impact of this species on aquaculture may become locally significant. 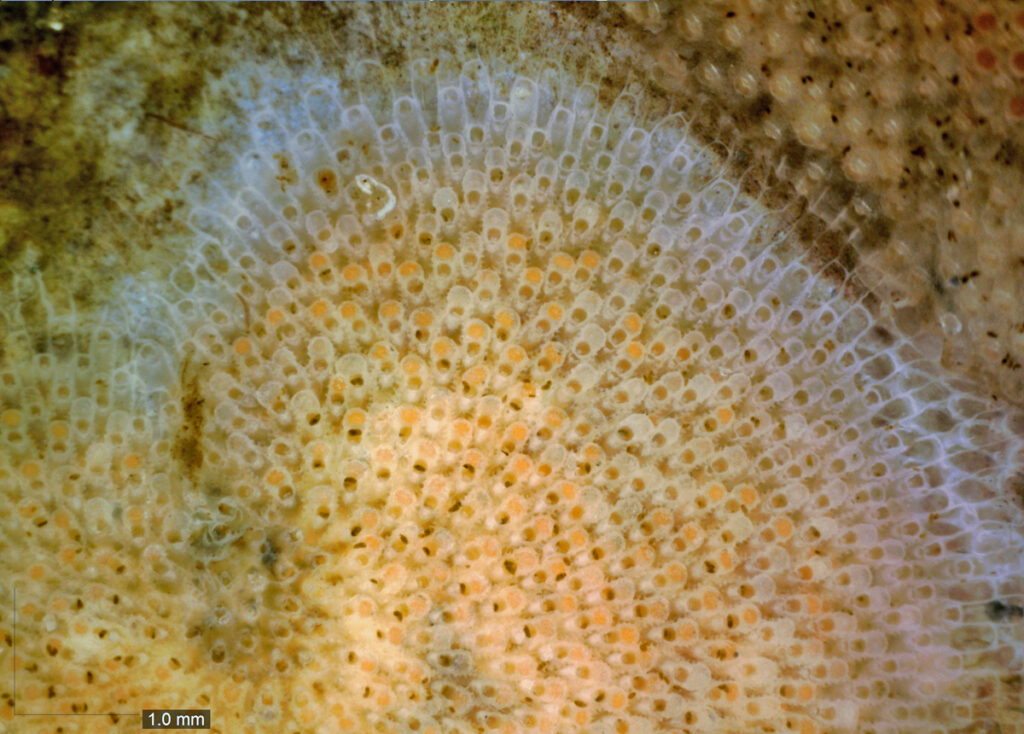 Red calcareous bryozoan species, which forms crusts, mostly on the inside of dead bivalve shells. The colonies are brightly red in the centre and white along the edges.

The red colour of the centre of the colony in combination with the white edge, distinguishes this species from most similar looking bryozoans. Relatively small colonies have a circular outline.

Many very similar looking red encrusting bryozoans may be found in Irish waters on shells. One of the most common native species is Cryptosula pallasiana. The colonies of this species do not have the white edge and tend to have a relatively irregular outline in comparison to the more rounded outline usually found in Smittoidea prolifica colonies.

Smittoidea prolifica can be found in the subtidal and in tidal pools in the intertidal on various hard substrata. It appears to have a preference to grow on the inside of empty bivalve shells, for example of oysters, mussels and razor clams.

Over the last decade Smittoidea prolifica has been widely recorded in Northwestern Europe from the Netherlands and Germany up to Ireland. Its colour is explained by the red embryos, which are present in all individuals except the ones along the edge. As most bryozoans have larvae with a relatively short pelagic life stage, it is likely that this species is mainly spreading with shellfish transports and within hull fouling communities.

Red encrusting bryozoan colonies on oysters and mussels are clearly visible and may therefore reduce the commercial value of these shellfish. Encrusting bryozoans in general can make smooth surfaces rough, increasing the settlement of other fouling species like ascidians and calcareous tube worms.  As Smittoidea prolifica colonies are mainly found on the insides of empty bivalve shells, the impact of this species on aquaculture may remain limited.