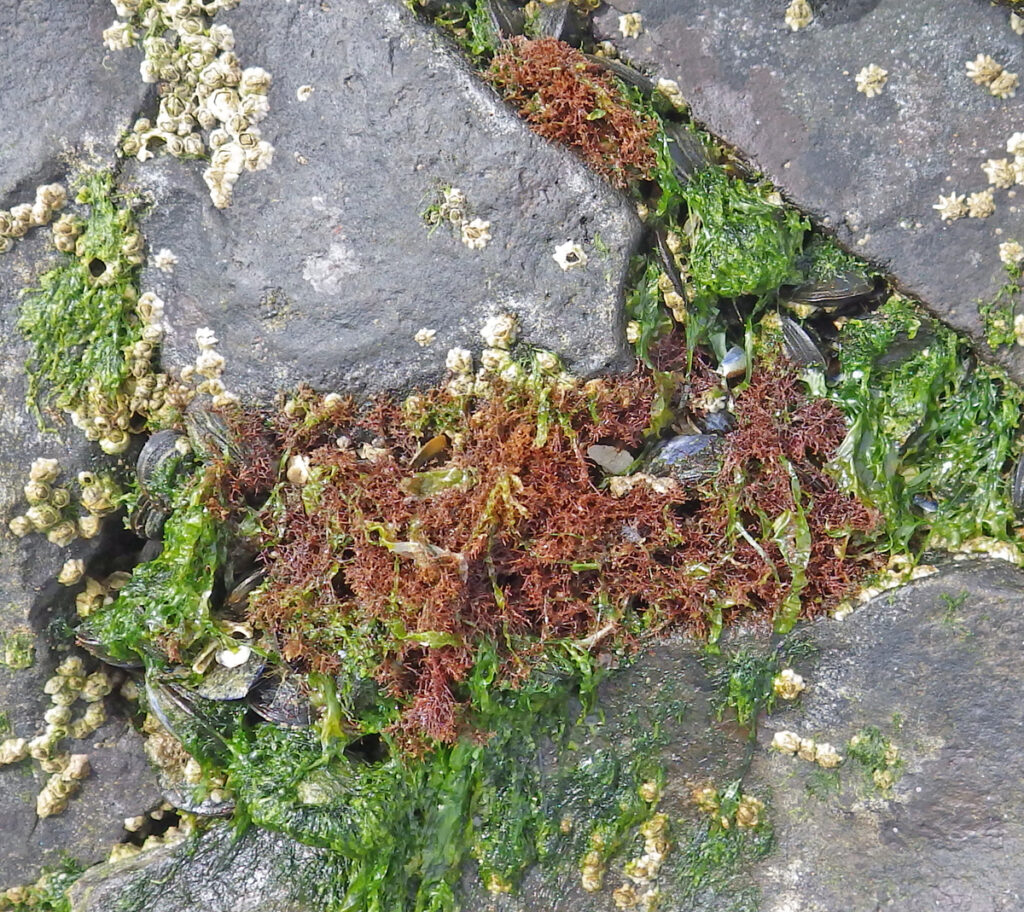 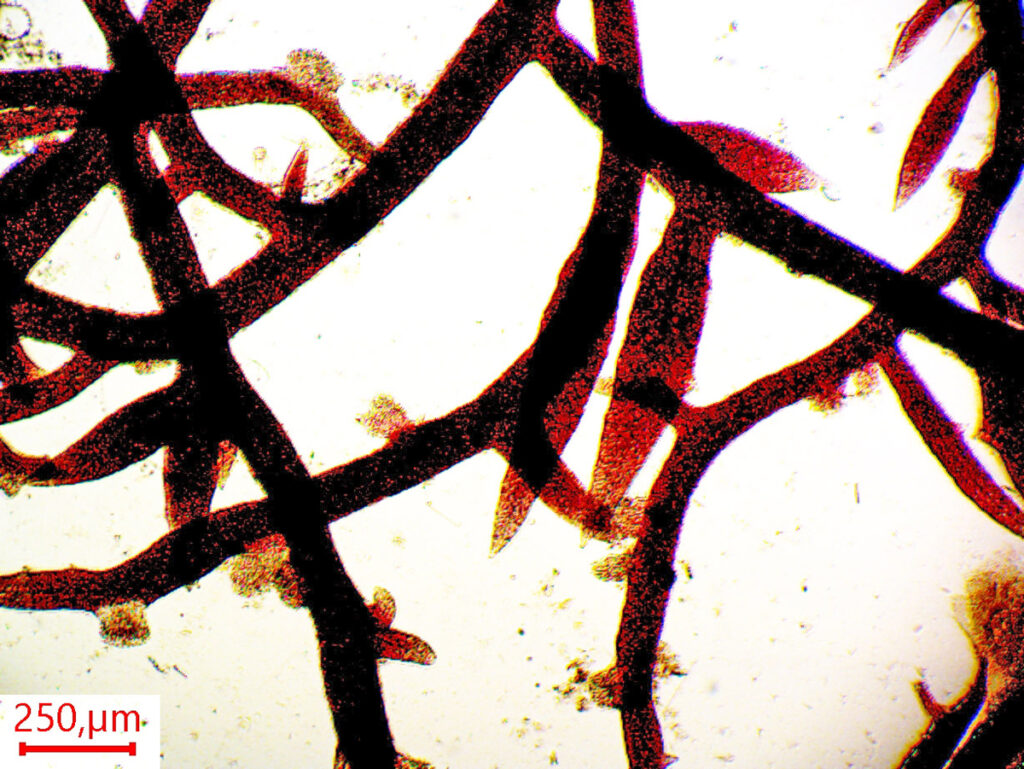 Red clump-forming seaweed species, which forms an irregular mat made up of bright red springy pom-poms of about 4 cm in height with multiple holdfasts.

Instead of having a clear main stem, the plant is bush-like with irregularly dividing branches, about 0.2 mm thick. The ultimate branches are short and appear to have thorns which are clearing visible using a microscope.

The thorns at the ultimate branches are typical for the species and can be especially helpful in distinguishing it from other similar species.

Many very similar looking red algae may be found in Irish waters. The thorns at the ultimate branches can help to distinguish between Caulacanthus okamurae and these species. Where other species may be rare, C. okamurae has the potential to completely dominate the intertidal zone, as it does at various locations on dikes in the Netherlands. This behaviour, typical for an invasive species, may reveal its presence on dikes where previously such a completely red coloured zone was absent.

Caulacanthus okamurae can be found in the intertidal on moderately to very exposed rocky shores, dikes and harbour walls. There it grows in irregular clumps on the rocks, mussels and in between other clump forming seaweeds, or on larger seaweeds.

Not yet recorded on the island of Ireland, but already common on the south and west coasts of England, sighted in Scotland and abundantly present on the dikes in the south of the Netherlands.

In Great Britain most plants appear to be sterile indicating that the species is mainly spread by fragmentation, reattachment and regeneration. Seawater temperatures above 19 degrees are necessary for sexual reproduction, which will be a limiting factor in Great Britain and Ireland. The main means of dispersal by which this species may arrive and spread in Ireland, is therefore expected to be fragmentation. The fragmented branches can drift over long distances with currents, after which they can reattach and grow on. One plant can actively form additional branches that can attach themselves to the surface next to the original specimen, by doing so, this individual of only a few centimetres in size may blanket large areas 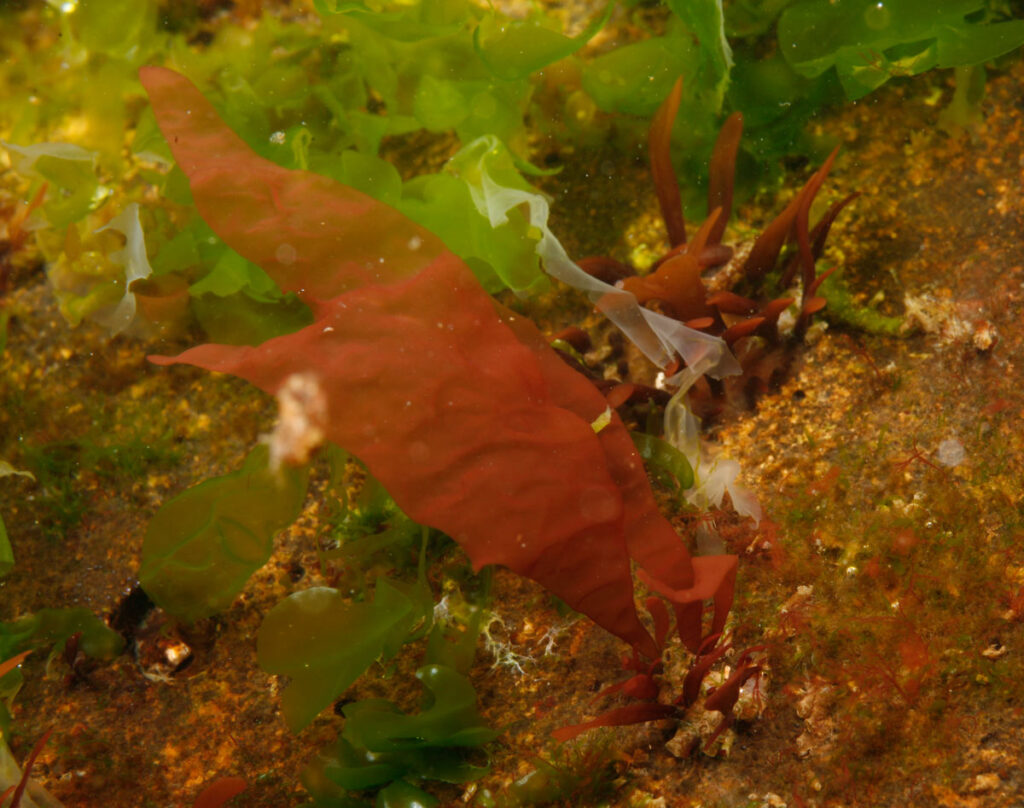 Red seaweed species, which can reach greater than 1m in length, but which is usually shorter. Specimens produce single or multiple elongated blades from the holdfast. These blades are either singly or irregularly divided, without any midrib and with smooth looking undulate margins.

Grateloupia turuturu typically forms relatively long, single or divided, elongated red blades with a tip on the end but no distinct irregularities, spines or teeth. The absence of a midrib distinguishes it from many similar looking species in Irish waters.

Grateloupia turuturu is usually found in semi-exposed to fully sheltered sites. It is found on rocky substrates in the low intertidal to shallow subtidal zones and on floating structures like buoys, floating pontoons and on mussel lines, commonly just below the water line.

Although the species can be found throughout the year the blades grow especially large, with most of the individuals being fertile in summertime (in Great Britain). G. turuturu can reproduce both by spores (carpspores and tetraspores), which are released in dense masses, and by vegetative propagation. After being in the plankton the spores settle and form small rounded discs that attach themselves to the bottom. From these discs blades will start growing. From fragments of these discs and/or the blades new plants can also grow asexually.

The species may cause some nuisance for rope culture and trestle systems as it may settle on the ropes and on the trestles reducing the water flow to the shellfish. 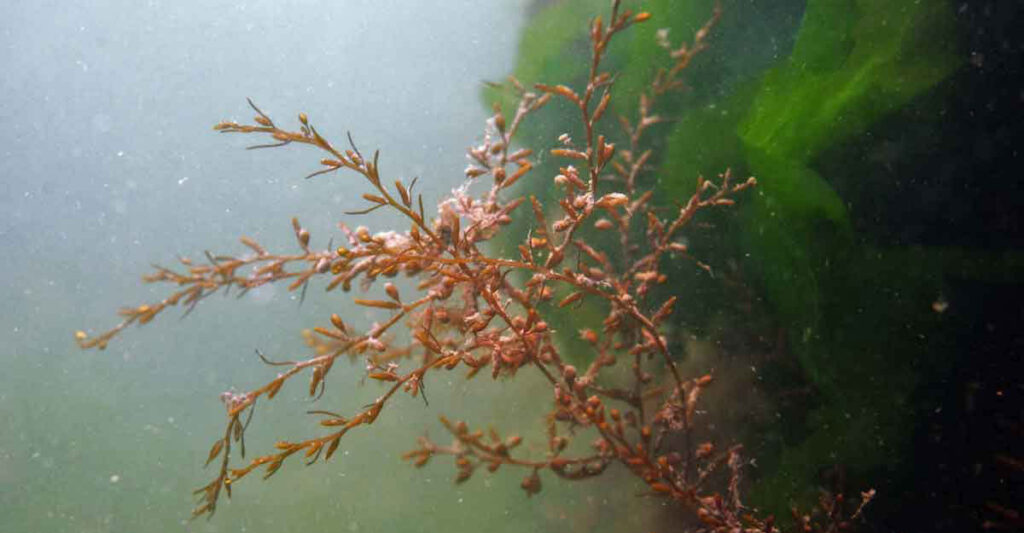 Brown seaweed species, which can reach at least 2 – 5 meters in length but is usually shorter. Main axis usually solitary on the holdfast. Leaves of the upper stipe are narrow, up to about 4 mm long, with toothed margins and no midrib.

The plants have distinct, small rounded to slightly oval, brown “berry like” vesicles in clusters or singly in the leaf axis.

At present in western Europe Sargassum muticum does not resemble any other seaweed species.

Although Sargassum muticum is mostly found in the lower intertidal to upper-subtidal on rocks, it can be recorded at depths up to 20 meters, and sometimes on floating objects like pontoons and rope culture systems.

Species present throughout the year. Fertilized eggs are released as germlings after which they disperse over relatively short distances and generally settle within 2 to 3 meters of the parent plants.

Because of the buoyancy and resilience of the species, specimens that break loose from the ground, can survive and drift large distances. Fertile branches, cast off during summer months, can float and survive for up to 3 months, explaining the success of wire weed as an invasive species.

The species may cause some nuisance for mussel culture systems and oyster trestles as the drifting specimens may get entangled in the ropes and on the trestles. In extreme cases the oyster bags get completely covered by the plants, reducing the water current and thereby the amount of nutrients that may reach the oysters in these bags. 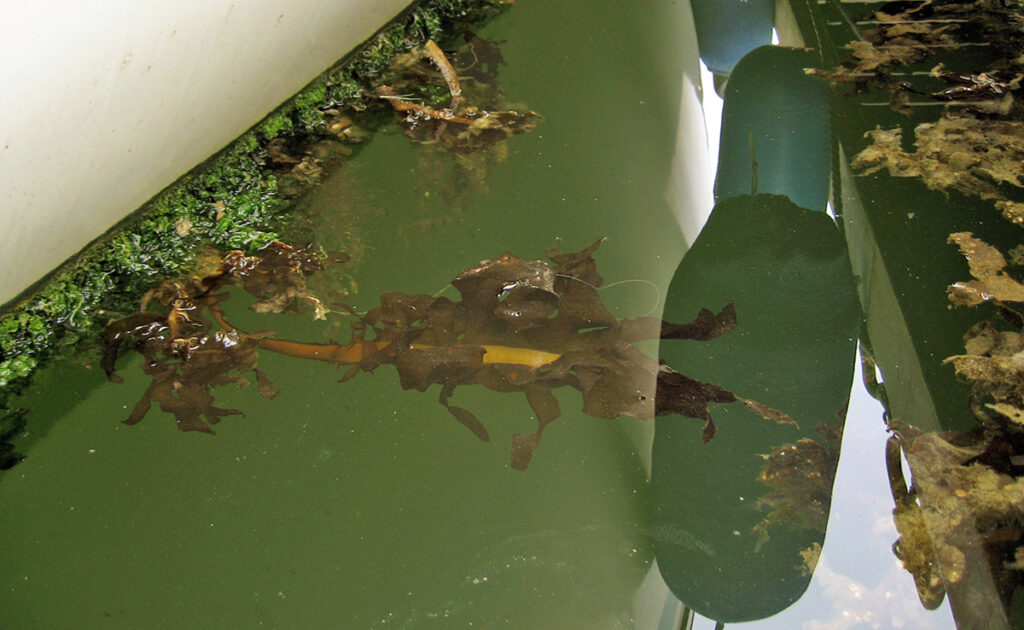 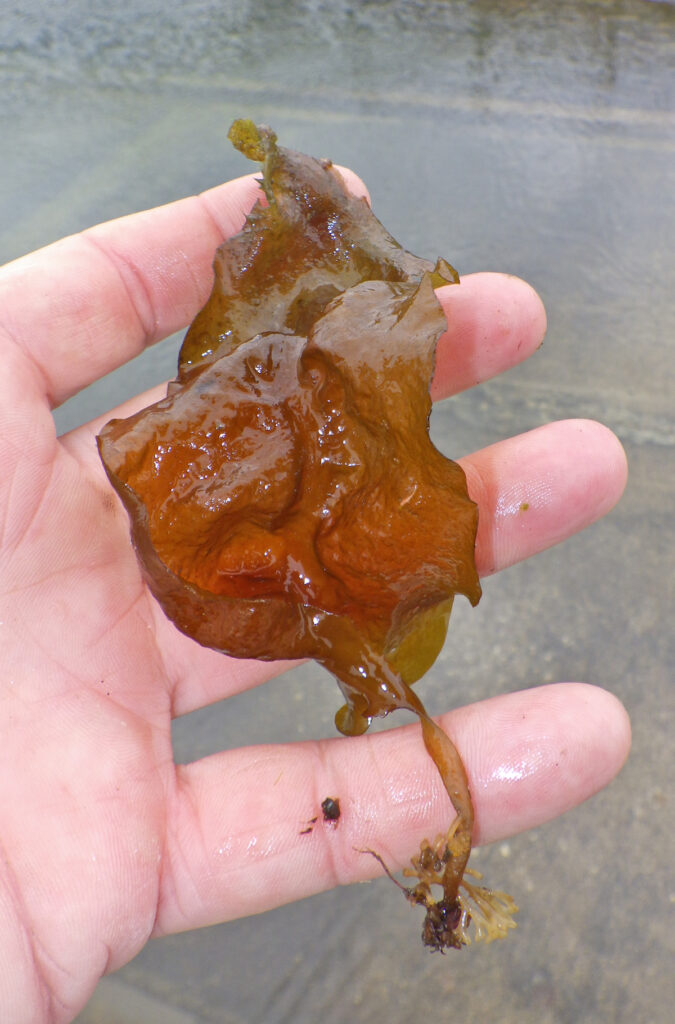 A brown kelp species, which can produce brown to dark green blades of up to 2m in length within a single year. Just above the holdfast, mature plants have two spiral harmonica-shaped sporophylls, which produce large numbers of spores in spring.

The plants have a distinct midrib and large lobes along the side of the blade.

Several native kelp species can resemble Undaria pinnatifida, but the juveniles of these native kelps do not have the distinguishing midrib and large lobes.   Juvenile specimens of Undaria can strongly resemble the native Alaria esculenta which do have the midrib, but which do not have the strongly lobed blades.

This is a fouling species that can inhabit hard natural and artificial substrates, from cobble and gravel, to shellfish beds. It only lives in submerged habitats, i.e. in the subtidal and on floating objects. It can be very abundantly present on marina pontoons, boat hulls and other marine floating structures like those used for rope mussel culture.  It appears to prefer relatively sheltered habitats in bays, estuaries and marinas.

Annual species, which can be found throughout the year, but most plants will die in summertime. Produces large numbers of spores in spring.  Spread by natural dispersal, boating and aquaculture activities.

The species can cause a nuisance for rope mussel culture as the large blades can distinctly increase the weight of the floats and lines. For bottom culture, the blades can cause problems as they may fill up most of the dredge while fishing.